The Suffolk coast is special. For geologists, cliff exposures are witnesses of time and beaches are evidence of process. Always check tide times when visiting the coast.

The Suffolk Dragon - our Suffolk coast leaflet leads you to beaches, cliffs and lost lands. 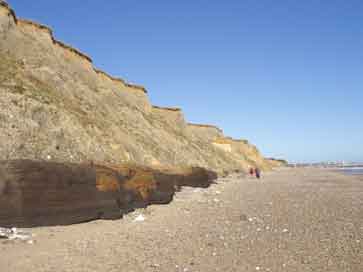 Dunwich CGS
A landslip exposes a fresh face of Norwich Crag sand and gravel ('Westleton Beds'). The pebbles from erosion of this gravel in the cliffs supply much of the shingle for Orford Ness and other beaches to the south. 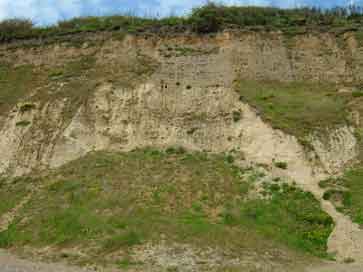 Thorpeness Cliff CGS
This shows glacial deposits on Norwich Crag sand. Good exposures in the cliff such as this tend to degrade very quickly - this was fortunately reported to GeoSuffolk by a local resident. 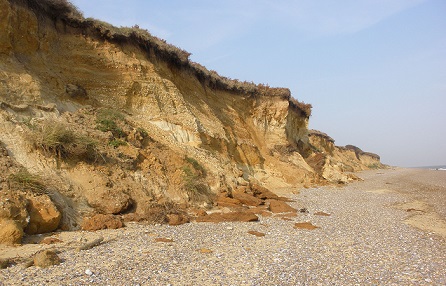 Thorpe Ness CGS - the beach to the north of the cliffs shown above forms one of the Suffolk 'nesses'.

Bawdsey Cliff SSSI
This shows ferruginous Red Crag resting on local London Clay. Note access to this section of the coast is tide-dependent. 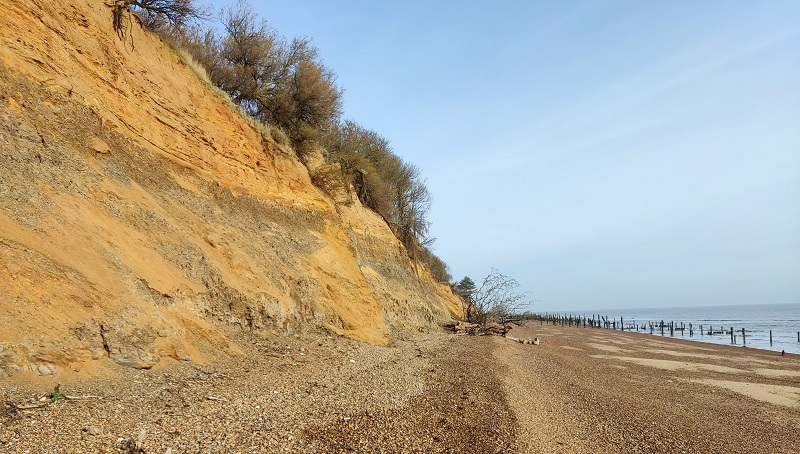 Places to visit - our coastal gazetteer. Everything listed in this section is publicly accessible or easily viewable and the huge variety means there is 'something for everyone'. Consult tide times for extra beach safety. 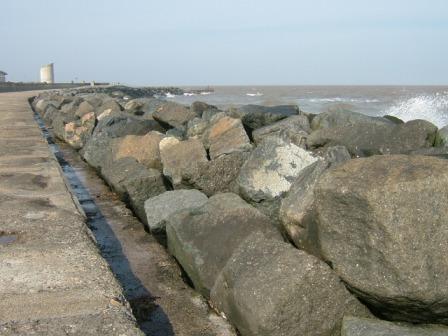 The easternmost District of England has much to offer the geologist and the tourist. Miles of sea-cliffs expose Crag sands and gravels, ‘Forest Bed’ deposits, with very rare flint implements of early humans, and ‘chalky boulder clay’ deposited by ice-sheets during the Ice Age. Modern coastal processes form cliffs and beaches, often changing within a year or even hours. Inland, the Waveney river valley and its gravel and peat deposits forms an attractive landscape. 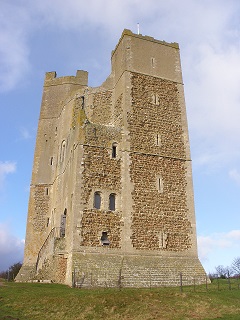 This is a wonderful coast for geological variety: Red Crag on London Clay at Bawdsey with other crags to the north; landslips in the estuaries, natural cliffs and the magnificent Orford Ness shingle spit. The fine tourist resorts of Felixstowe and Aldeburgh make excellent bases for exploring the coast. Ninety per cent of the Coralline Crag – a rock type unique to Suffolk – occurs in Suffolk Coastal DC. ‘Boxstones’ (brown sandstone nodules), the debris of the Victorian ‘coprolite' industry, may be seen in the walls of Sutton and Shottisham churches. Searles Valentine Wood, a local geologist hero lies commemorated at Melton Old Church.

Geodiversity in Babergh. This is a fine area to enjoy estuaries. The local ‘London Clay’ plays a major part - in cliff exposures and on foreshores, as a feature of landslipping, and, when recycled by the rivers, as a contributor to the modern estuary mud. In the west the River Stour has dissected the landscape giving this area some of the steepest slopes in Suffolk and it has cut down into the underlying Chalk around Sudbury.

Howard Mottram - The cliff against Dunwich Heath: it's further importance in our understanding of the Norwich Crag sands and gravels, SNH 50 (2014)

The Suffolk coast is designated an Area of Outstanding Natural Beauty. Visit the Suffolk Coast and Heaths website to find out more.

Lowestoft Museum (Nicholas Everitt Park, Oulton Broad) has excellent geology displays. Use their website to find out about Pakefield.

Dunwich Museum has useful downloads on coastal processes on its library page.