Surely all geologists should have their photograph taken in Coprolite Street, Ipswich! Elsewhere our ancestors were masters of flint in fine churches such as Lavenham and Blythburgh.

Kentish Ragstone (a sandstone) comes from the Medway valley area but has been imported for the walls of several Suffolk churches and for making sea walls. 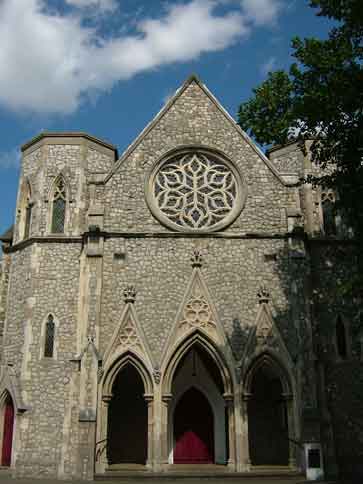 It is good to see the use of natural stone in a modern public sculpture. The Question by Ben Langlands and Nikki Bell at the University of Suffolk Waterfront plaza uses marble from Estremoz in the Alentego Region of Portugal and the dark rock is dolerite from Rosario in the Colonia Department of southern Uruguay. 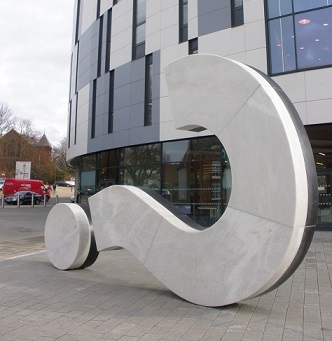 Flint is apropriately used in this modern heritage centre. Find out more about building stones in Breckland from our new leaflet In Breckland with GeoSuffolk. 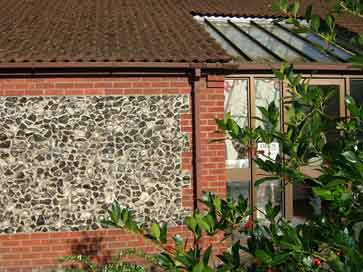 Enhance your visit to Bury St Edmunds by downloading our special handwritten map of the geological highlights of 'God's Square' - the Abbey Gardens, the Cathedral, the Great Churchyard, and St Mary's Church. (The rock and brick store on the Cathedral map no longer exists; there is also a new extension to the cloisters using Ancaster Stone.)

The Coralline Crag 'Rock Bed' was used as a building stone in some of Suffolk's Medieval buildings, as for example in the boundary wall of Greyfriar's Priory. This was repaired in 2013 by English Heritage and Suffolk County Council using Coralline Crag from a local quarry. 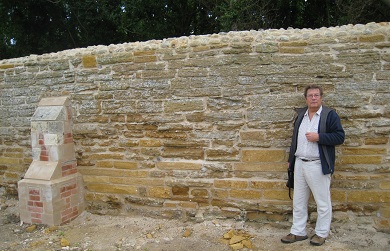 Find out about some of the building stones in our local churches.

Places to visit - our urban/industrial gazetteer. Everything listed in this section is publicly accessible or easily viewable and the huge variety means there is 'something for everyone'. 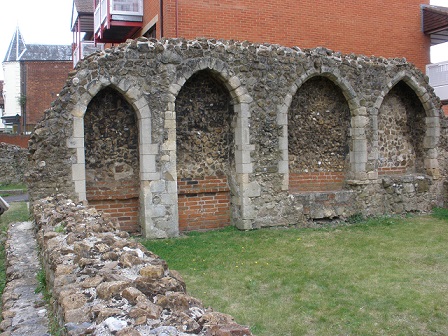 Fine examples of London Clay septaria in the low walls of Blackfriars ruins in Ipswich.

Ipswich is well worth exploring for geological interest. The local Sarsen stones are great favourites. Some parks have unexpected seepages of ground water at the Red Crag/London Clay boundary – some are left in their natural state, others are gathered into ponds. The Museum’s collections are especially rich in local fossils, but also contain surprises such as Indian fossil mammals. A walk through the town centre will reveal a wealth of building stones and surely everyone should have their photograph taken in ‘Fossil Animal Dropping Street’ (Coprolite Street) – a reminder of the former artificial fertiliser industry. Take a look at our GeoIpswich leaflet plus an excellent article on Portland Stone by Gill Hackman in the October 2017 Ipswich Society Newsletter and 'Ipswich Rocks' in the January 2021 Ioswich Society Newsletter 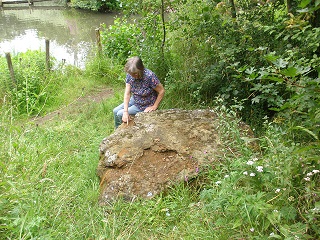 The River Gipping has cut a swathe through the Mid-Suffolk landscape, exposing a full range of Suffolk geological strata – Chalk, Tertiary deposits, Crag sands and glacial deposits. For well over a century it has been the scene of economic use of geology – Chalk for agriculture and cement, glacial boulder clay for cement, and sand and gravel for the construction industry. Gravel has been excavated from several geological horizons including valley-bottom sites now occupied by lakes. Smaller valleys often show characteristic solution and erosion features. 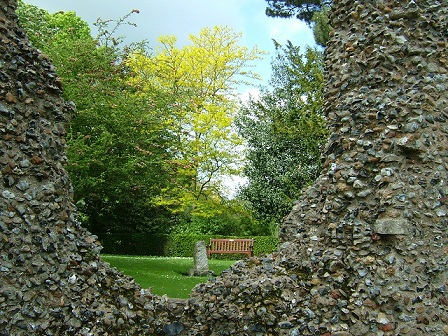 Chalk underlies this area, and old underground workings have been prone to collapse. Overlying glacial clay is seldom exposed but periglacial features are recorded from several localities, as are interglacial river deposits (not well exposed and mainly on private ground). Bury St Edmunds Cathedral is built of a fine selection of (non-local) limestones.

Many walls are local rock museums. Download this form and take it with you on a field trip to a wall and record your finds. Help is at hand: Ian and Ros Mercer of the Essex Rock and Mineral Society inform about the types of rock to look for (we have added one or two Suffolk specialities) and how to record them. GeoSuffolk will send copies of received forms to the ERMS who originated this survey.

Howard Mottram - Unravelling the Glacial Geology of the Ipswich Area - the work of Slater and Boswell, SNH 50 (2014) 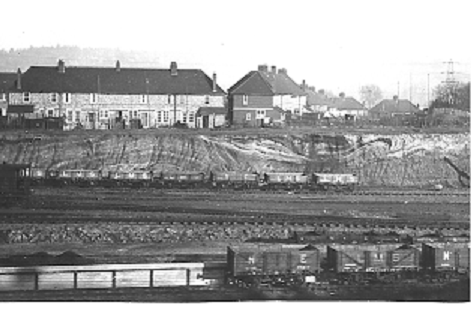