Much of Earth Heritage Suffolk has been incorporated into this website and some sections are available to download here:

GeoSuffolk's 10th Anniversary Volume, edited by Dr Roger Dixon and published in 2012. Click on the cover photo for a list of contents - over 460 pages, 40+ authors, numerous colour photos, maps and diagrams. Available from Rock Gallery.

Stoke Tunnel SSSI  A long time ago - 210,000 years before the present day this place was the muddy shore of a lake or river. Read GeoSuffolk's panel (in place on the SSSI) to discover the story of 'Lake Ipswich'. Written by Bob Markham.

An Interlude from Battle Casualties - Naples 1944.  A young soldier's recollections of the Vesuvius 1944 eruption - GeoSuffolk's contribution to the Geologists' Association Virtual Festival of Geology 2020. 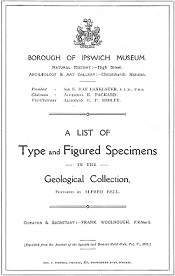 For more of these type and figured specimens see GeoSuffolk Notes No.71.

From Brandon to Bungay: an exploration of the landscape history and geology of the Little Ouse and Waveney Rivers (2009) and Evolution of  Breckland Landscape: chalkland under a cold climate in the area of Beachamwell, Norfolk (2015) both by Professor Richard West have been published by the Suffolk Naturalists' Society with the help of GeoSuffolk. £10 each or special offer £15 for both from the SNS shop.

Breckland on the Web (2016): GeoSuffolk's latest production has been published online by the Suffolk Naturalists' Society. Thomas T Paterson (1909-1994) spent some time at the University of Cambridge researching local Early Palaeolithic sites. That at Barnham in Suffolk was published in 1937 and the other Breckland sites were demonstrated at the British Association's 1938 meeting at Cambridge. His thesis has rested in the University Library since 1942 and Professor Richard West has 'rescued' (with comments) the Suffolk geology part of it.

Chalk in the East (2009): This leaflet, produced for Geo-East by GeoSuffolk’s R and C Markham won a Highly Commended in the ENI Challenge in Down To Earth February 2011. Blakenham Woodland Garden and Newmarket’s Devil’s Dyke and Rowley Mile Racecourse star for Suffolk. This is the 2008 draft which was sent to Ark Design before publication.