The Coralline Crag, a Pliocene (about 4 million years old) deposit unique to Suffolk, is home to myriads of different fossils. In 1977 Professor Richard West of Cambridge University discovered fossil pollen grains, so minute that no detail can be seen with the naked eye. It was obvious that they had arrived wind-blown from neighbouring land, and what trees they represented! There are giant redwoods, umbrella pines, and many others, now exotic to our shores, as well as more familiar oaks and birches. 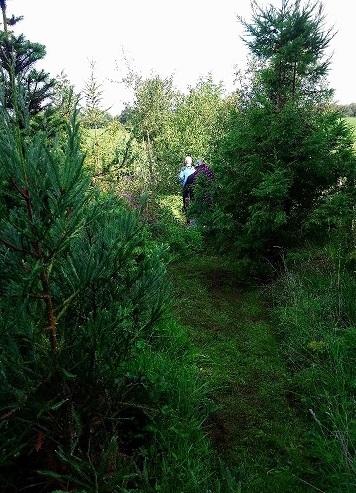 And thus was born the idea of Suffolk's Pliocene Forests, an interpretation project of over 100 sponsored living trees representing their Pliocene ancestral genera. They grow on private land at Sutton and walkers on the footpaths near Rockhall Wood SSSI can see the young forests.

Autumn, ten years on, the trees were tall enough to 'paint the sky' - the coniferous Dawn Redwood, Metasequoia glyptostroboides, with its beautiful foxy-red colouring along with the gentle pinks and reds of Taxodium distichum and Glyptostrobus pensilis with their preference for swampy conditions. The deciduous larches, especially Larix kaempferi are colourful and among the deciduous trees even the young pinnate leaved Meliosma veitchiorum demonstrates what splendour the future holds.

Last but certainly not least are the Acers and Oaks - of the former Acer palmatum 'Ozakasuki' with its deep crimson blur has much promise along with A. davidii and A. saccharinum, as also do Quercus rubra and Q. pontica (Armenian Oak). The original Pliocene forest would have been equally pleasing to the autumn eye. 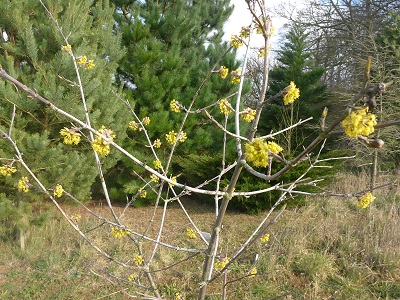 Barry Hall tells us more about the Pliocene flora in this 60-page booklet. 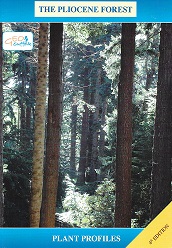 Barry Hall's article 'Life, the Universe and Sutton Knoll', reproduced here from 'A Celebration of Suffolk Geology', (2012) edited by Dr Roger Dixon, gives a full account of the first three years of the Pliocene Forest.

Also of interest is the Geraldine Mary Harmsworth ice age park trail in Southwark. See the 34 tree species that arrived after the Ice Age and before Britain became an island.

Glasgow's Fossil Grove in Victoria Park shows Carboniferous fossil trees in situ. The Fossil Grove website is a good introduction to the site.

The Crag sands deposited by the Pliocene North Sea are Suffolk's fossil El Dorado. Here lie the remains of extinct whales which sang unknown songs of ancient Suffolk whilst they were hunted by giant sharks. On land the spectacular fauna included tapirs, mastodons and red pandas - denizens of the original Pliocene forest. This paradise was lost when Suffolk shivered in the wilderness of the Ice Age. 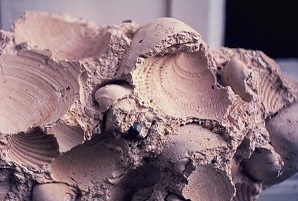 A temporary excavation in the Red Crag at Sutton yielded this 'left-handed' whelk (illustrated), some beautiful top-shells and a cockle named after Dr Parkinson.