Breckland's unique character is defined by its geology, with Chalk always near to the surface overlain by a thin layer of sandy till or blown sand. It lies across the western borderlands of Suffolk and Norfolk and was first named Breckland by Wm. George Clarke in the Naturalists Journal, 1894.

Sometimes the sand is heaped into mounds and ridges as here at Icklingham - features which have been identified as wind-blown dunes. They are for the most part vegetated and therefore inactive now. 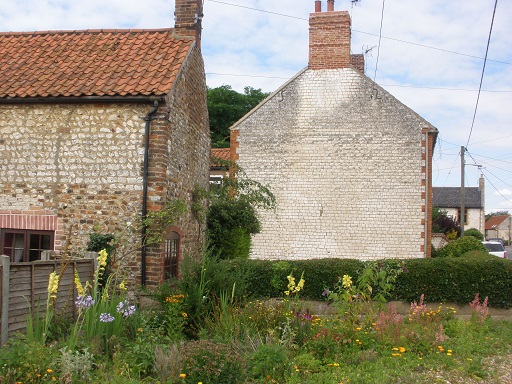 The harder varieties of Chalk underlying Breckland are suitable for building purposes and are known locally as 'clunch'. The chalk walls, easy to identify by their creamy white colour, in these cottages in Northwold are typical of many Breckland towns and villages.

Breckland exhibits a variety of ground features of periglacial origin formed subsequent to the great Anglian ice sheet which covered Suffolk and Norfolk about 450,000 years ago. Permafrost, prevalent during post-Anglian cold phases, and ground water in the underlying Chalk were significant in the development of these relict landforms. Large areas of patterned ground stand out like giant fingerprints, where frost action has sorted the sand and chalk into polygons and stripes.

A GeoSuffolk/Suffolk Wildlife Trust excavation at the Knettishall Heath reserve - across a vegetation stripe, with brecciated white Chalk exposed in its base and a biscuit-coloured chalky diamicton in places. The trough is filled with medium-grained orange sand containing some shattered flints. 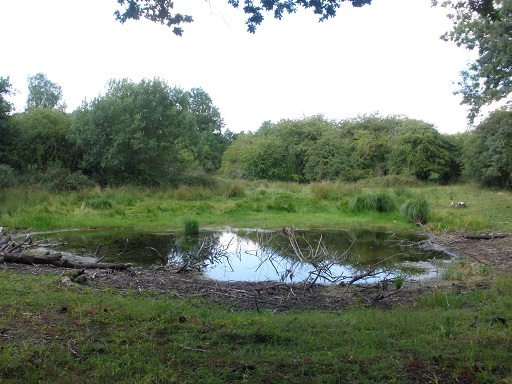 THere is also much 'hummock and hollow' topography created by ground ice, with much of the lower ground in Breckland pockmarked by holes and ponds. This circular pond on the Norfolk Wildlfie Trust reserve at Thompson is one of many such ground ice features.

Places to Visit - our Suffolk Breckland Gazetteer. Everything listed in this section is publicly accessible or easily viewable and the huge variety means there is 'something for everyone'. 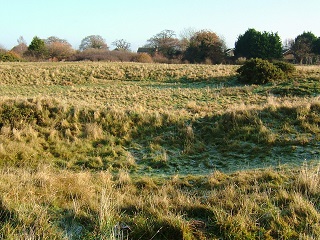 The oldest Chalk in Suffolk underlies this district; hard bands were once much used for buildings. Flint occurs in the Chalk in the Brandon area and was once in demand (for guns) over much of the world; it is also seen in many buildings. Some of the earliest flint implements of humans in north-west Europe have been found here in gravels of a long-lost river system destroyed by the vast ice sheets which deposited ‘ice age’ clays and sands. The former extent of present day river systems is preserved as gravel terraces above the modern flood plains.

Find Out More - from our leaflet:

Anne Mason & James Parry - Flint in the Brecks: a report by the Breckland Society (2016)

Richard West - Evolution of a Breckland Landscape (2015). £12, published by the Suffolk Naturalists' Society