On Saturday November 5th GeoSuffolk went to the Geologists' Association Festival of Geology at UCL in London.

I travelled via Cambridge as our trains were buses so to speak. It was lovely to be back there with our stand in the same place as usual. GeoSuffolk members Barry and Judith Hall were already there when I arrived and had made a very good job of the Ipswich Geology Group display. It's the 50th anniversary of the inception of that august group which morphed into GeoSuffolk with the turn of the millennium. I added our Mandarin banner to the display and we were all set. Peter and Jill Grainger arrived soon after from Exeter and were a great asset as they could talk about the IGG photos in the display. The red banner attracted lots of attention and then we talked to people about Suffolk Geology. A young Chinese woman was gazing at it and when I asked if she could read it she said 'Of course, it says Suffolk Geology' - one of those affirming moments! Caroline Markham 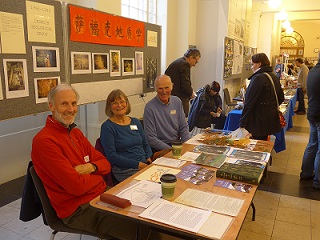